Skip to content
The Works of Plato: A New and Literal Version, Chiefly from the Text of Stallbaum
Creator: Plato
Creator: Henry Cary, translator.
Publisher: London: Henry G. Bohn
Volume: Volume I
Issued: 1848? 1854?
Language: English
Source: Memoirs pp. 151–2: "We were reading Plato's Apology in the Sixth Form. I bought Cary's crib, and took it with me to London on an 'exeat' in March.… I went to bed and began to read my Cary's Plato. It so happened that I stumbled on the Phaedrus. I read on and on, till I reached the end. Then I began the Symposium; and the sun was shining on the shrubs outside the ground-floor room in which I slept, before I shut the book up." Grosskurth notes on this passage, "There is probably a confusion here. Henry Cary (1804–70) translated Herodotus and Plato in 1848–9. The well-known crib man was W. B. Kelly who produced as series of Kelly's Keys to the classics fro 1848 onwards" (303). Regis accepts and expands the suggestion: "Symonds appears to misremember his crib: Henry Cary was a translator of classical literature, but Phyllis Grosskurth identifies W. B. Kelly's series, Keys to the Classics or Kelly's Classical Texts, as the more likely candidate. In the latter case, Symonds would be reading Plato's Apology of Socrates, the Crito, and the Phaedo (1848) translated by J. Eccleston and Roscoe Mongan" (163). Kelly's "Keys" were literal translations aimed at the student in Greek or Latin class, but though the one cited by Regis includes the Apology, the series seems not to have included one for the Phaedrus or Symposium, quite possibly because of the trouble a literal translation would have caused. Under the circumstances, it seems better to trust Symonds's reference to Cary, since any translation could be used as a "crib." However, this leaves the difficulty that volume 1 (trans. Cary) in the Bohn's Classical Library six-volume edition of Plato's works includes the Apology and Phaedrus, but the Symposium appears instead (titled "The Banquet") in the third volume, edited not by Cary but by George Burges. Perhaps Symonds is wrong about reading the Symposium; more likely he bought (and brought) the whole set and wrongly assumed/remembered from the first volume that it was all "Cary's."
Reproduced In: Hathi Trust
Reproduced In URL: https://hdl.handle.net/2027/uc2.ark:/13960/t9m32qs2m
Author of this Entry: SB
EVIDENCE SET
Evidence Type: Book 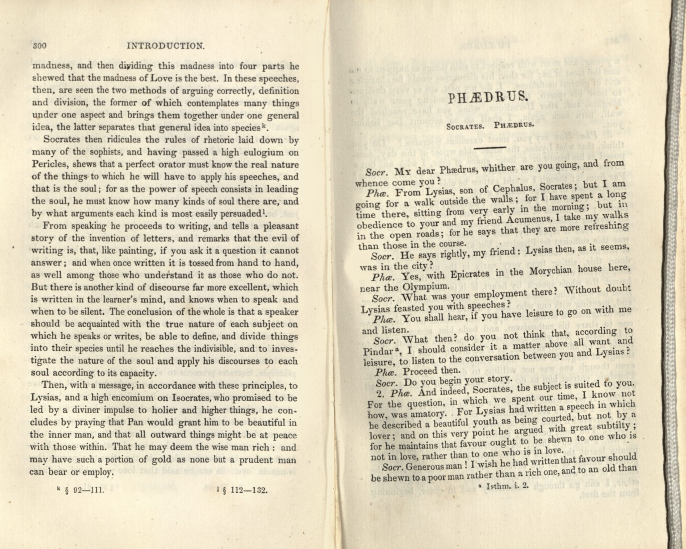