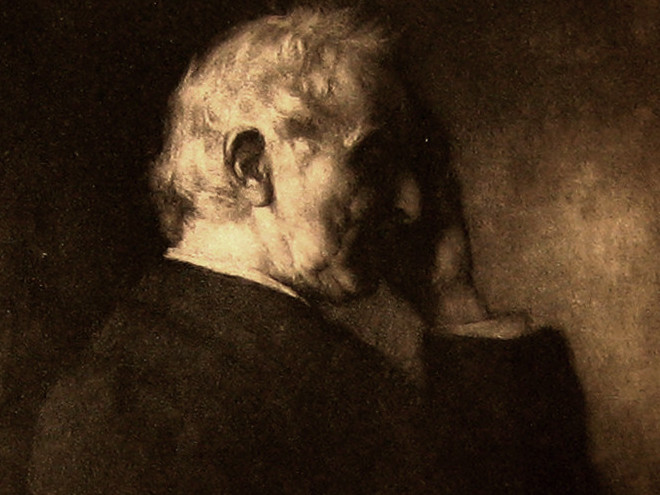 In his Memoirs, John Addington Symonds writes of his relationship with his Classics Professor John Conington at Harrow as an “almost wholly good” friendship (170). He describes Conington as a “scrupulously moral and cautious man,” yet also as someone that “sympathized with romantic attachments for boys” (170). Based on Symonds’ account, their relationship was not erotically charged, yet we can infer that Conington likely saw elements of himself reflected in Symonds’ interest in his male peers. This is further supported by the fact that Conington gave Symonds a copy of Ionica by William Johnson, later known as William Johnson Cory.

According to a note from a reprinting of the 1891 volume, the 1858 edition of Ionica that Symonds possessed contained forty-eight poems, which were formally published by Smith, Elder, and Company. One of the preeminent publishers of the era, Smith, Elder, and Company were most well-known for publishing Jane Eyre by Charlotte Brontë (albeit under a pseudonym). Thus, it isn’t entirely shocking that they were willing to risk printing Ionica despite its references to love between men. As for Johnson himself, we might imagine that his highly respected status as the head of Eton afforded him the benefit of the doubt to a greater degree than most.

Still, it appears that by 1877 even Johnson felt the need to exercise greater caution. He privately printed a second, anonymous volume of twenty-five poems under the title of “Ionica II.” This second collection did not even include a title page. Interestingly, it also did not contain punctuation, extending a kind of non-conformity to its structure. Evidently, as is supported by Symonds’ Memoirs and the need for multiple reprintings, Ionica and Ionica II captivated an engaged readership. Given this, in 1891, a volume combining both sets of poems – eighty-five in total – was formally published. Hopkins possesses a copy of this edition in its Special Collections.

Symonds writes in his Memoirs that it was through reading Ionica that he first learned of Johnson’s “affair” with Charlie Wood, one of his “pupils” (170). This “love story” struck Symonds, “straight to my heart” and “inflamed my imagination” (170). Lines such as “For him who led me through that park; / And though a stranger throw aside / Such grains of common sentiment, / Yet let your haughty head be bent” from the poem “Desiderato” resonated with Symonds (Cory). However, their influence was not benign. In his own words, Symonds writes that they “helped to form a dream world of unhealthy fancies about love” (170).

He was so moved by Ionica, that Symonds wrote to William Johnson Cory seeking advice on “the state of my own feelings,” his love for his male peers (170). According to Symonds, Johnson replied with a letter on the practice of Greek “paiderastia in modern times” (170). This correspondence seems likely to have influenced Symonds’ essay on the topic of male love in Ancient Greece, “A Problem in Greek Ethics,” which, although it was initially printed only privately, found a similarly enthusiastic audience as Ionica.

Ionica not only left an indelible impact on Symonds and his mode of thinking about sexuality, it also played a role in facilitating a conversation between Symonds and Conington that would alter several of their peers’ lives. It was during a discussion of “passion between male persons” spurred by Ionica that Symonds revealed to his professor that his former headmaster, C.J. Vaughan, and his classmate at Harrow, Alfred Pretor, had engaged in an affair (171). While his friends, including Pretor himself, felt betrayed and ended their relationships with Symonds, Symonds viewed revealing what he knew as his moral obligation. The subsequent chain of events led to Vaughan stepping down from his position at Harrow and declining two bishoprics (174). It is ironic that, rather than existing as a bridge between Symonds’s concept closer to an empathetic understanding of his peers’ affairs, Ionica figured prominently in his memory as associated with the ruin of several of his closest friendships. 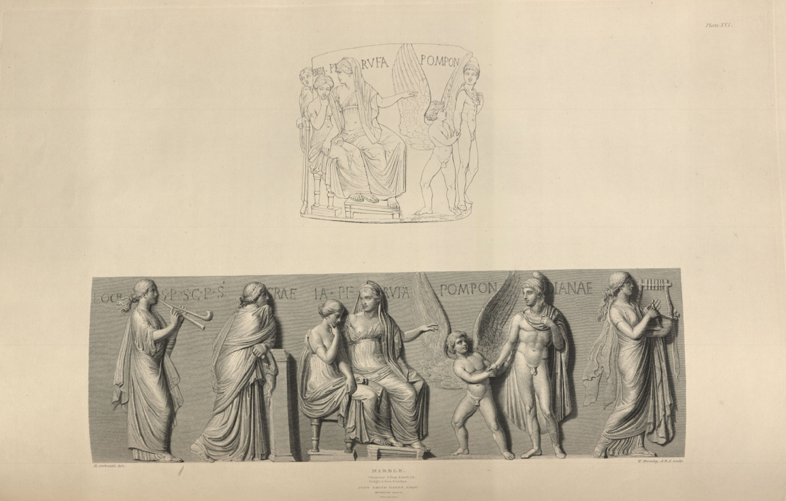 In his Memoirs, Symonds wrote that his “house was well stocked with engravings, photographs, copies of Italian pictures and illustrated works upon Greek sculpture” and more.  He considered “the two large folios issued by the Dilettante Society” as “among his chief favorites” (118). The Society of Dilettanti, the group of men that compiled such collections, was founded in 1734 and consisted of young, educated Brits who had been on a so-called “Grand Tour” of Italy, as was fashionable at the time. The impact of the collections of engravings and sculptures that they published is evidenced by Symonds’ passion for consuming such compilations and, later, his own time abroad in Italy.

The image above is a unique art object featured in one of the Society’s catalogs. While it shows a relief that currently adorns a vase, the work was believed by the Society to have originally been a Περιστομιον, a decorative engraving around the mouth of a well. It portrays the introduction of Paris to Helen by Venus, who shares in the task with the three muses, Polyhymnia, Erato, and Euterpe, and, of course, Love himself (as personified by the winged boy) (31). The presence of this Cupid-like vision of Love is what makes this image particularly striking, as we know from Symonds’ memoirs that he was so enraptured with Plato’s the Phaedrus and the Symposium, two of the most well-known dialogues on the subject of love,that he read them in one-sitting, until “the sun was shining on the shrubs outside the ground-floor room in which I slept” (152).

Today, while they may take on new forms like Instagram poetry or advice columns, conversations surrounding the nature of love live on and retain the power to offer us perspective that help us to feel less alone. One hotly debated topic remains whether or not falling in love is something we can control. In their description of the image above, the Society of Dilettanti writes that “the conduct of Helen is invariably represented as the effect of an irresistible destiny” (Specimens). In other words, Helen’s position, surrounded by those conspiring to make her fall for Paris, leaves her vulnerable; there is nothing she can do to resist her fate. Interestingly, in his Memoirs, Symonds expresses a similar lack of agency, writing that his “enthusiasm for male beauty” has “ruled him from childhood” (152).

While this image portrays Love acting upon a man and a woman, we can imagine Symonds identifying with the kind of experience of an all-encompassing, undeniable attraction depicted. This is all the more powerful when considered in conjunction with Plato’s Symposium, especiallyPausanias’ argument that “there is dishonor in yielding to the evil, or in an evil manner; but there is honour in yielding to the good, or in an honourable manner” (181a). Helen herself may have met a dire end, but the Symposium emphasizes that so long as one’s love is characterized by noble qualities, succumbing to the influence of its larger-than-life power can better both of the parties involved. As Symonds writes, through reading this ancient text, he realized the “moral charm” and “sublimity” in the love he shared for other men and, in this way, discovered a means of beginning to find “harmony” (152).